We hope you'll join us for our 4/23 webinar on using data tables to apply reference ranges and AE codes in OC4. For more information and to register, visit https://register.gotowebinar.com/register/2882170018956684555

Sasha-w Posts: 1 ✭
October 2016 in General Discussion
Sometimes you want to backup your system for pcDuino8 Uno. The simplest way is using dd on Linux or Win32DiskImager on Windows to read back the whole TF card and save it as system image file. If I use 8G TF card, the backup image file will be 8G, but in fact, the system just take 2G disk space.So how can I backup a smaller system image? The following steps will tell you.
Pre-requisites

In official Ubuntu image for pcDuino8 Uno, there is a shell script at /etc/init/, called pcduino.conf. This is the init script for pcDuino board, and one job of this script is used to expand the rootfs. Each time system boots, this script will check there is pcduino_init_flag file at /etc or not. If yes, resize the rootfs. If we want to create a auto-resized system image, we need to create pcduino_init_flag.

Right click the partitions that have been mounted, then umount them. umount 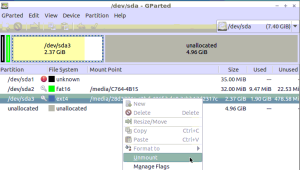 Right click the partition which need to shrink and select resize. 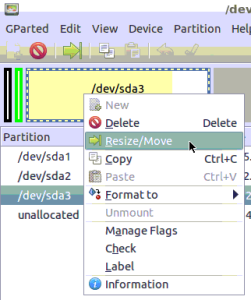 Set Free space preceding(MiB) is 0, this guarantee the continuity of these three partitions.

Furthermore, you can use tar or 7z to compress the image file. As to me, I use 7z tool to compress it and get an compressed file whose size is only about 650MB.
5. Restore system from image file

On windows, you can use win32disk tool to write the image file into TF card.

Insert the TF card into pcDuino8 Uno and after the second boot, all things are back to normal.

Maybe you can directly use dd to backup the system into a smaller image file, but I have never try it.